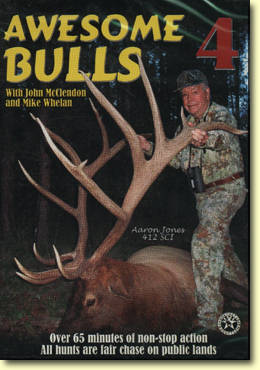 The Awesome Bulls crew has done it again, another great BIG BULL video. In Awesome Bulls 4, you will see several huge bulls harvested on film, including an 8x7 bull, that scores 412 points SCI. We followed and filmed this bull for 3 1/2 months, while he traveled over 14 miles from where we first see him, to where we finally harvest this great bull. Incredible footage of one of the largest bulls ever taken on video..

On another hunt, you will witness the taking of a 410 point, 7x7 bull, a HUGE BULL. We filmed this great bull for over two years and then harvested the bull on video.

Six great hunts, both archery and rifle, plus more footage than you have ever seen of huge bulls. This film is full of what you have come to expect in the Awesome Bulls video collection. Giant bulls and lots of action.
All fair chase, all public lands!