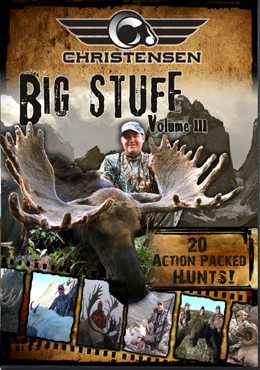 For nearly a decade, Christensen Outdoors has been piping some of the most exciting over the shoulder hunting action from the field into living rooms across the country.

In Big Stuff III, tag along on over 24 such hunts spanning the upper reaches of the Yukon to the arid country of mexico.

* Witness dall sheep harvested with one shot from 750 yards
* Kodiak brown bear spotted at over 2 miles away with hunters closing the distance to mere feet
* Hunters countdown and take aim on two B&C mtn. goats standing side by side at 500 yards
* Peer over the shoulder of Utah's sportsman moose tag recipient as he looks to harvest the pending state record
* AND MUCH MORE....